Does your producer read a laundry list of announcements before each show?  Want to have more fun? The Milford Area Players do humorous monologues, delivered by a costumed, often accented character, in theme for the play. Before I Hate Hamlet, in tunic and tights, I implored the audience to “draw forth thy cell phones, and with a stroke, silence them” — then pointed out the restrooms, such that “To pee or not to pee is never the question.” For Getting Away with Murder, a group therapist invited amnesiacs to “take a program home for future reference. Kleptomaniacs may take two.”

Our audience loves it, and now expects it. How about yours? Here’s why, and how, to make your curtain speech something special.

You should tell your audience about fire exits, smoking, restrooms, and cell phones, and warn them about strobes, gunshots, and actors in the aisles. It’s good business to push your concession stand, raffle, and other fund-raisers, plug upcoming events, and invite them to join your mailing/email list. But you’re tempted to cut back on the marketing to avoid putting everyone to sleep.

Don’t skimp or bore — entertain and inform! Your audience will pay attention because it’s fun. The humor will warm them up and the theme will help them enter the world of the play. The actors will pay attention too, gauging the crowd by the reaction to the skit. And you or a few local playwright wannabees will enjoy writing funny monologues, seeing them performed, and hearing the applause.

Creating themed announcements is easy and quick — just a few hours spread over a few weeks. Start with the angle, based on the show: lifeguard for a beach show, doctor for a hospital show. The angle should use common cultural knowledge, and create a recognizable character.

The tone depends on the show and your audience. Serious plays deserve muted humor; for All My Sons, we pretended it was the 1947 premiere, predicting future success for “young playwright Arthur Miller.” For a hilarious comedy like I Hate Hamlet, go all out with jokes like “to pee or not to pee.”

Be careful not to upstage the play. Don’t steal jokes, give away surprises, or add confusing information to the world your audience is about to enter. Use what everyone knows coming in — the title, the brief publicity blurb, the time and place, the set if it’s visible when you go on. Avoid particulars from the play itself.

Whatever you come up with, clear it with the director, who is trying to deliver the best possible experience of the play, and doesn’t want your intro to ruin it.

You have an angle, now write. List the items to announce, a phrase each. (Keep this as a template for every show, and soon you’ll have a standard, easily remembered sequence to follow.) Then list things relating to the angle — for my group therapist, I listed well-known psychological disorders.

A standard joke-writing technique is to combine two unrelated things–like your announcements and your angle. For each announcement topic, write down something from your angle list (“…oral fixation goes with smoking…”). Or make up something new; carry a pocket memo recorder and note potential jokes whenever you think of them.

Don’t be afraid to aim high or low. Something for everyone, says Pseudolus.

Once you’ve picked the best jokes for each announcement, write the actual lines. Make it flow; if needed, add material to set up jokes or segue between segments. But keep it tight and short — under three minutes delivered naturally, including any accent. (The accent can be lots of fun! A great audio resource for world accents is http://accent.gmu.edu.)

Be consistent; work everything into the theme. Once you’re in character, it’s jarring to become an ordinary announcer for even one item.

The costume can be simple, like a French waiter’s bow tie and menu, or a fisherman’s waders and flannel shirt. It’s not the play, so it doesn’t have to be perfect–suggest enough to get the idea across, and you’re done.

Get your walk-on cue into the lighting board. A “spot” with house lights to one-half makes it easier to see and connect with the crowd.

I memorize the intro (barely), refresh my memory just before the show, and carry a copy onstage. If your character is doing anything resembling announcements, you can glance at the paper–but you can’t read it. Print key phrases in bold to jog your memory.

Don’t gun it–if you wrote it correctly you can deliver it, with proper accent and dramatic timing, in less than three minutes. (Comedy 101:  Wait for laughter–if you start the next line too soon they won’t laugh again, for fear of missing something.)

It won’t be perfect–some jokes will work, some won’t–and you can revise after each show. (You may even have to add items at the last minute. Keep them in theme–it’s easier than it sounds.) You may perform flawlessly, or not, but that’s okay–the audience is so pleased to hear something more entertaining than a dry list, they’ll forgive you.

Once you start doing themed announcements, you won’t want to stop! It’s a signature for the Milford Area Players–our audience now expects it, and more importantly, it brings them back. Our actors count on it to break the ice before each show. I even used this commitment as my angle for Inspecting Carol–as Jacob Marley, I shook chains made from photos of my previous intros, moaning that I was “doomed to deliver themed announcements for all eternity!” The regulars in the crowd roared in appreciation.

Unlike Marley’s ghost, I enjoy it, as does my audience. Trust me; you and your audience will, too. It makes theatregoing more fun and theatremaking more creative. Isn’t that what theatre is all about? 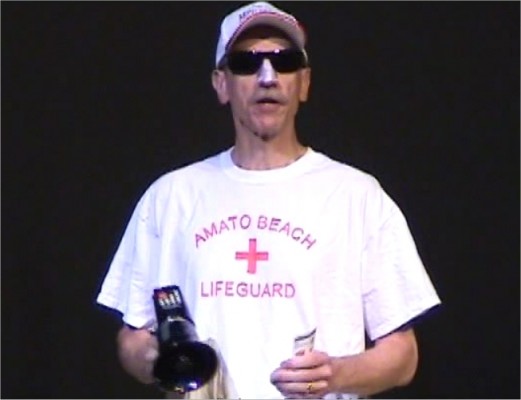 To Gillian on her 37th Birthday
“There are no dogs, alcohol, ball-playing, nudity, or smoking anywhere in the beach vicinity.” 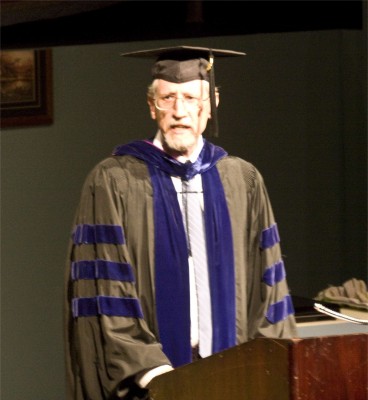 The Pursuit of Happiness
“There are a few things you need to know that aren’t covered by your Bachelor of Audience diploma.” 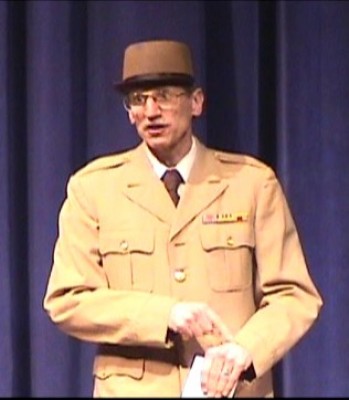 Appointment with Death
“Did you know that a camel can hear a bell ring across three miles of desert? Did you know that in 1938 cell phones do not exist yet? So if your phone rings, it will ruin the setting, not only for the people around you, but also for thousands of camels. Please turn it off now.” 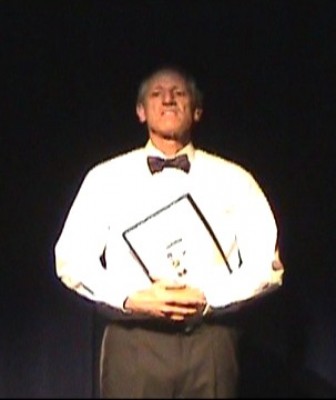 Don’t Dress for Dinner
“This delicious comedy is served in two courses, with a short intermission to cleanse the palate.” 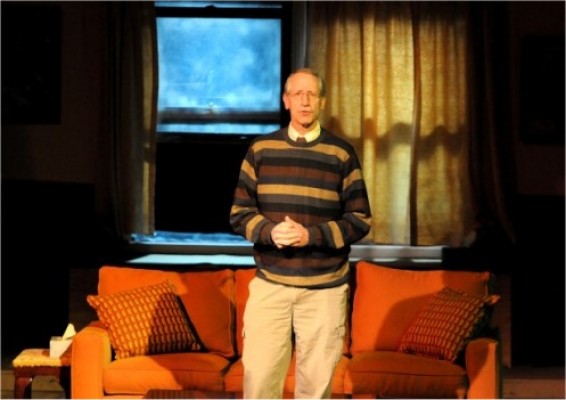 Getting Away with Murder
“Don’t let fear of commitment stop you from signing up for our email list. But if you’re obsessive-compulsive, please sign up no more than eleven times.” 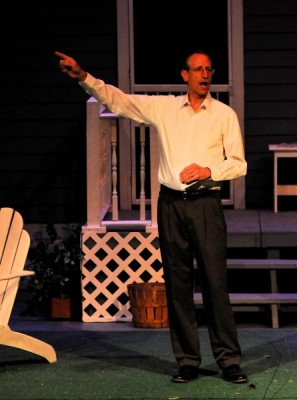 All My Sons
“If you hear a siren, don’t worry, it’s not an air raid, it’s just a fire alarm -- the fire exits are on either side and behind you.” 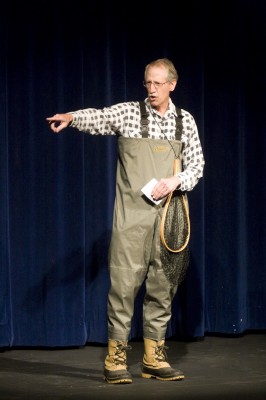 The Foreigner
“You’ll be pleased ta know our outhouses are indoors. We got a coupla nice plumbed and heated three-holers jest ‘round the corner in the lobby for ya.”

Note — these documents are as printed for carrying onstage — later versions used columns on landscape paper for convenient folding into four readable parts, and bold phrases for reference at-a-glance without reading word-by-word.

The Ride Down Mt. Morgan — doctor; lab coat and stethoscope

Getting Away with Murder — group therapist; sweater and slacks, lots of brown

No Sex Please, Were British — financial adviser; conservative suit — this was during the 2008-2009 financial crisis

A Christmas Story — Christmas carollers (much of the cast); winter coats, hats, boots

‘Art’ — snooty art gallery curator; blazer and slacks — we also labelled objects throughout the building as if they were art, with funny titles and artist names, and outrageous prices.

The Pursuit of Happiness — Graduation speaker; mortarboard and PhD gown — marched up to lectern to Pomp and Circumstances, then after speech, tipped the lectern back and rolled it off stage, again marching to P&C.